Wow. This year was weird. We didn’t buy a thing online and instead went into the stores and made our purchases! I think it was good for me to go out and see the people. Watching people is one of the primary ways we writers find things to write about. Thanks for all of the good material, by the way!

Last week as I wandered through the stores, I noticed an overwhelming seriousness on everyone’s faces. Everywhere I looked, people were intently scouring the shelves for the items on their lists. Very rarely did I see a smile even as they passed me by.

After experiencing about as much seriousness that I could stand, I tried an experiment. I decided to go through the grocery store with a smile on my face the entire time. Do you know how hard it is to smile that long?  Anyway, the results were interesting. As I wandered up and down the aisles smiling, people literally stopped and watched.  When they realized that I noticed them watching, they would give me a half smile and look away quickly. As I was leaving the store, a lady getting a cart to go into the store stopped and watched me.  I was actually able to make eye-contact with her and she shouted across the lobby of the store to me—a complete stranger—“Merry Christmas!” I was blown away by how just a simple smile could attract so much attention.

In Matthew 5:13, the Bible talks about believers being salt and light to this earth. It goes on to ask the question, but if the salt loses its flavor, how will it be seasoned?  I was reminded of that verse this week. Christmas is a time for us to celebrate our King!  It is a time to tell the world about Jesus! It’s an open door to talk about what our Savior has done for us in our lives. We need to season the world with true reason for the season! If we lose our joy, or our saltiness, during the most important season of our Christian walk, we are simply no different than those with no hope.

The world needs those of us who are believers to be the salt just as the scripture calls us to be.  We need to smile and remember why we celebrate!  By our smiles on our faces, the world will wonder what is different as we truly are salt to a serious and lost world. A little salt’s effect in a dark and too serious world is amazing.

If you have salt on your food, you know it. Some spices blend and make an overall nice change to the taste, but not salt.  Salt makes a statement. If we are truly salty, our presence will be felt. Try not to take the secular constraints of the season so seriously and allow them to rob you of your saltiness. Rather, take time to rejoice and focus on The One that brings a smile to your face!  Be prepared as when you do, others will take notice, recognize your saltiness and will want to know more about why you smile.

Just simply be the salt.

Have a blessed and joyful Christmas!

Matthew 5:13 (NKJV) “You are the salt of the earth; but if the salt loses its flavor, how shall it be seasoned? 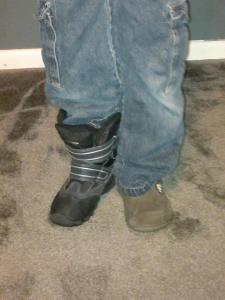 Our grandson, Brycen, wanted to spend time with us today.  It’s always fun having him visit and never boring.  His mom, Jamie, dropped him off before church so he could go with us and then out to lunch as that is our regular routine.  The kids and grandkids alike look forward to Sundays as we all spend time together and they always know we’ll be going somewhere good for lunch.   Brycen had gotten himself ready this morning and there was just one detail he realized his mom might not be happy about after he arrived at our house.  He called Jamie into the other room and said, “Mom, you might be upset, but look what I wore today.”  Jamie looked down and on his feet were one boot and one Croc!  We all laughed and decided it just wasn’t a big deal.  At least it wasn’t in his world anyway.  It was more important that he was spending time with us and enjoying his day.

I remember one morning a long time ago, I was trying to get the kids in the car to get them to school and the little girl, Katie, from down the street was walking by.  I ignored her as I was getting kids into seatbelts, making sure they had lunches and all that I had to do to make sure their days went smoothly.  However, Katie was insistent.

She kept saying, “Mithus Edwards, Mithus Edwards” (that was my name at the time).  Finally I turned around to this little girl in coke bottle glasses resting on the end of her nose and said, “What Katie?”  She said, “Mithus Edwards, did you know you have one black shoe and one blue shoe on?”  Unlike Brycen, in my world, it would have mattered!  Katie saved the day!  Oh how horrified I would have been if I arrived in our store that day and looked down as I was helping a customer to find that my shoes didn’t match!  It could happen to any of us, right?  As a matter of fact, who made up the rule that shoes and socks all had to match anyway?  I don’t think there’s anything Biblical about that.

Even though I personally like my shoes to match, being different isn’t always wrong.  Yes, it is not socially accepted to wear two different shoes, but if a person does, what’s the harm?  As Christians, we may feel as though we might as well be wearing two different shoes because people look at us and think we are so different from everyone else.  I take it as a compliment if someone tells me I’m different in relationship to my faith.  As a follower of Christ, I want others to see my faith is not something that conforms to this world; rather, I am free to be different…because I am.  I have been set apart in Christ.  I am in this world, but I am not of this world.  Others can stop, stare, ridicule and gossip, but I don’t care.  I know that God is why I am here and if I am called to be different from the world, bring it on.

One day I actually did make it to the office in two different shoes.  My secretary at the time gasped as I walked out to give her some paperwork as she looked down and noticed my dilemma.  Knowing I had an important person coming to meet with me in a couple of hours, I knew I had to remedy the situation immediately.  As I went out to my car to go get some other shoes, I realized my keys were locked inside. Talk about a bad day!  I remembered I had an extra key in a magnetic box stuck under the car for times such as this.  So, I looked around the parking lot and the coast was clear, so this dignified person in a suit and skirt, started climbing around on the ground…two different shoes and now trying to reach the middle of the underside of my not so small car to get the key!  Where is Katie when I need her anyway?

By the time I was done, I also needed another pair of hose to add to the pair of shoes I needed to replace.  I realized with the situation I was in, I looked even more stupid trying to be like everyone else than if I would’ve just admitted my faults, laughed about my situation and moved forward with my meeting as I was dressed originally.  Chances are my client may not have even noticed my shoes.  If they did, we would’ve laughed and they would have never forgotten our meeting that day.

My question this week is, “Are you trying so hard to fit in that you are losing who you are in Christ?”  As Christians we are not perfect and others will point that out from time to time unfortunately.  However, because of Jesus, our imperfections no longer matter.  We are free to be the person we were made to be as His death on the cross covered all of those mistakes.  The Bible says, “We are the salt of the earth.” That doesn’t say to me we’re going to be ordinary but just the contrary. Don’t spend your time trying to be something you are not. Crawling around in a parking lot so to speak, does not help you conform.  It only makes you look silly. Stop worrying about others who stand in judgment; rather, find peace in knowing that you were created to be different and God is pleased that you are.  May your salt be salty this week as you season your world!  Have a great week!

Matthew 5:13 (NKJV)
[Believers Are Salt and Light] “You are the salt of the earth; but if the salt loses its flavor, how shall it be seasoned? It is then good for nothing but to be thrown out and trampled underfoot by men.

And do not be conformed to this world, but be transformed by the renewing of your mind, that you may prove what is the good and acceptable and perfect will of God.